Recently I covered the time period that was pretty dark in my life. In The seven months that changed my life I talked about a time when I had never felt so lonely and how depressed I had become because of the end of a friendship that meant a lot to me. Today marks the fourth anniversary of that day and I’ve spent most of it reflecting on the last four years, and more importantly, how no matter how dark things may seem, there is always hope.

So first of all, a song, and one that has meant a lot to me in the last 18 or so months, helping me get over a lot of bad stuff in my life and realise that things can generally only get better.

So yeah, I have spent most of today reflecting on how life has changed since then and mostly for the better. Not only did it eventually result in me deciding to finally change gender (and before anyone thinks it, this post isn’t really about me changing gender, although right at the bottom I am going to put one of those “then vs now” pictures I post on a semi regular basis), but it also prompting me becoming more decisive and wanting to explore life more.

Aside from changing gender, it started off a chain of events that saw me go abroad for the first time, as well as changing jobs (I applied for the role I eventually got at BT about two weeks after the friendship with Jodi ended) and just becoming more open to things. If you’ve ever seen “Yes Man” then you will know what I mean when I saw that I opened up to possibilities that I had previously shunned, and by doing this I found new things that I now love, such as music that I had previously been “meh” about.

For example, one music group that that would apply to is “Sound of Arrows” and below is a song that I think is appropriate in the context of the rest of this post.

I know some of you will be wondering what this post is about, or more precisely the point of it all …. it is to stress that no matter how bad things seem, there is always light at the end of the tunnel, and in most situations you will come out of the other end better than when you went in.. I was in a really bad place this time four years ago. I genuinely didn’t know what to do with myself and it felt like I was on a downward spiral.

I am now in a job that I love, I live in a city that I’ve wanted to live in since I was in my early 20s (I’m 31 now just for reference) and if you’d have told me on March 16th 2012 that I would end up being as happy as I am in now at this stage in my life, I would have laughed in your face.

As Alfred says in “The Dark Knight”……”Things were always going to get worse before they got better”.

So anyway, I’m going to leave you all (mainly those that come onto my website from a blog that my blog seems to have been RSS feeded into) with one of my usual “side by side” images. On the left is me in March 2012 (after watching Canterbury live in Leeds) and about a month ago. Safe to say I’m happy with how the hormones have changed how I look. 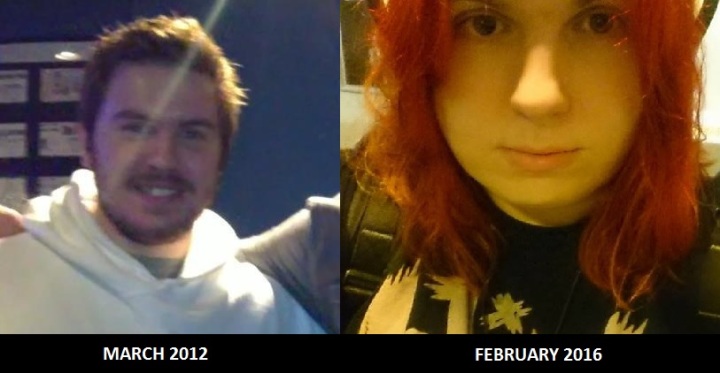 2 thoughts on “Four Years On : I got better and you can too”