It’s December 4th and whilst most people are preparing for Christmas, I have spent the majority of the day reflecting on it being a significant anniversary for myself. On this day in 2012, 28 years, 2 months and 26 days of waiting came to an end as I started the physical change of becoming female. I had been given my first batch of estrogen patches and I haven’t looked back since.

The physical changes are still something that I haven’t got used to. There’s the obvious stuff, such as the development of breasts, slightly wider hips, the lack of being able to grow facial hair now, however, it wasn’t until I compared a photo of me this morning to the last one that was taken of me before I came out as transgender in July 2012. 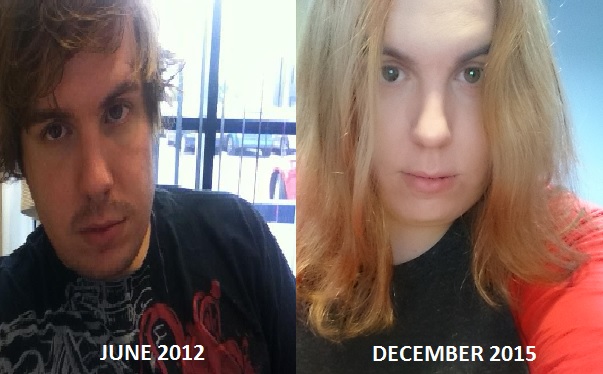 One of my friends commented that despite having a relatively similar facial expression, I actually look happier somehow, and in many ways this is correct. For the first time in a while I’m relatively content with life.

I’ve been offered a role as a Project Co-ordinator in my current company, a role that I’ve wanted to do for a long time, also marking my fourth successive successful interview (a remarkable achievement given how many failed interviews I had in 2014), because of this I’ll be moving to Leeds, which is somewhere I’ve wanted to live in a long time, and I have a group of friends that I actually want to hang around with (something that I haven’t been able to say in a long time) and things are looking up in general.

So based on that, this is a quick blog entry for those that are still in my life. I wanted to show my gratitude for those that have stuck by me through this entire process, and more importantly, those who accepted me after only ever knowing me as Kate, with special mentions to Holly and Jess, who both inspire me with their outlook on life and their easy-going nature. Also to Catherine, who is probably the closest thing I have to a best friend at the moment (I willingly choose not to have someone who I specifically refer to as a best friend after events a few years ago).

However, I also want to take time to thank those that are not in my life anymore, even those that I never imagined that I would be thankful to, specifically Jodi. I used to consider Jodi to be one of my closest friends, and without getting into it too much, we had a little bit of an issue (putting it lightly) at the beginning of 2012 and our friendship didn’t last, but that turned out to be the catalyst to me finally deciding to change gender. So, if you ever read this Jodi, which I doubt that you ever will, thank you for your years of friendship, being there when I needed you, and more importantly putting up with my crap, and even though we will probably never talk again, the door is always open from my side if ever you need anything.

Anyway, I’m going to end this blog entry with how I normally start them, with a song. This is one of a few songs that got me through a bad spell in my life this time last year, so it has particular meaning today.